The story of chess career of Paul Keres can take more than one book. And the most valuable source of information can be considered the author’s thoughts on his sport career. In those days every self-respecting chess player was trying to display his views on paper. Now, not many members of high chess society would risk revealing secrets of their creative laboratory. It would certainly give some advantage to a potential opponent at the board. Of course, Paul Petrovich decided to take this step only in the twilight of his career as a chess player. He was really a veteran of the game. The world first heard of young Estonian in 1937 after gaining the first place in tournaments in Margret and Ostend. But really he became popular only after a year on very strong ABPO tournament in Holland. Nobody expected such a powerful play from a young man. Keres tied the first place with American player Reuben Fine. But you need to know what kind of people also took part there. To name only some: world champion Alexander Alekhine, Capablanca, Euwe, Botvinnik, and others. There ware almost a royal family of chess. Some of the victorious games of the tournament with commentary you can find here. After this event, it became clear that there is another contender for the chess crown. Apparently, only the beginning of the World War II prevented this to happen. 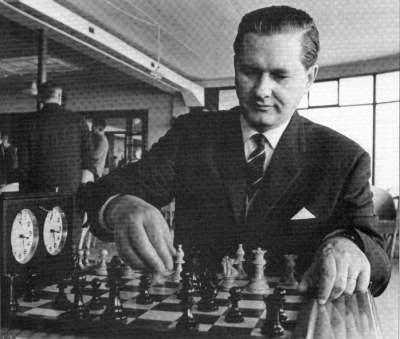 The book can be called autobiographical. The author tries to show events as he saw them. In it you will find many interesting stories of Paul. Obviously, it also contains many excellent commented games with well-known chess players. The author decided to select for the book only won games. But the Estonian chess had a positive balance with almost all the best chess players and even world champions. He managed to make a draw with the world champion Anatoly Karpov at the end of his life. It is believed that the book’s title is chosen slightly inaccurate. In Russian book called “One hundred games.” Naturally, with such title it will be impossible to sell many books. Therefore, for English readers the title was chosen “The Road to the Top”. But Keres and was one of the top chess players for 30 years. I think no one would have been against it, if a book would rename “The Road on the Top”. But it would be a bit at odds with the character of Paul Petrovich. Who this book is addressed to? It is written entirely in simple language for a wide range of readers. But the greatest benefit will find chess players with dynamic style piece play. It was one of the strongest side of Keres. Each chapter begins with a detailed description of some period of his career. You’ll see how athletes’ career can be difficult and sometimes dangerous. The author is also known for his theoretical researches in opening stage and in the endgame. The greatest attention is paid to the middle of the game. You will learn more about a critical position, and how to make right decisions there. The book is certainly worth reading and is one of the best to improve your game. Paul Keres will remain a national hero in Estonia for his contribution to the authority of the country.

Download The Road to the Top by Paul Keres pdf