I shall write, between weightlifting and TV, how I work at home, how I’m analyzing the results of past tournaments and how to prepare for the upcoming.

So, the next tournament is over, the morning after the closure gone, and we are finally home. I believe that in this moment a player is able to work effective individually: the head as it were “charged”, calculate variants quick and easy, efficiency is high. All this are residual effects of the tournament, but they are short-lived. As for me in 7-10 days (depending on how difficult was the tournament) comes complete numbness and apathy to chess or, as usually said, “overeating” them. Nevertheless, even for a week and a half one can do a huge amount of work. In September 1997, arriving home from Ukraine, about 2 weeks I worked on the chess 14-16 hours a day, and six months later there was a huge progress: in three open tournaments in a row, I completed International Master norm, and raised elo rating from 2370 to 2490. 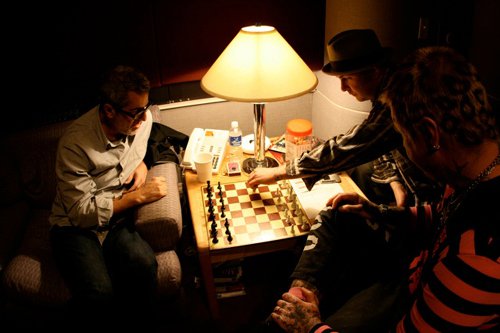 Working on chess at home

Now let’s move directly to what to do. Undoubtedly, the most important element – an analysis of games played. That is known by everyone, but not all do this. That is in vain. If you read Botvinnik’s books – the greatest specialist of training in the history of chess, one can see from his comments that he played the openings or typical positions based, essentially, only on his own parties. Even when being a world champion, he could repeat his game of the tournament the A-category, and ignore the latest survey of theorists.

I start the analysis of games played immediately at the tournament after each round by inputting them to the computer with brief notes: noting mistakes, covering part of opening, trying not to forget about interesting possibilities that remain behind the curtains. Later, this “rough draft” helps get started much easier.

I can also recommend a method of analysis and self-control, which I have invented by myself: after a tournament to evaluate each game (e.g. with a 10-point scale), indicating pluses and minuses. For example, it was poorly played opening, non-confident variants calculation at certain moments, but at the same time bold positional solution and competent play in the endgame. Then the results are summarized and revealed the overall level of the game (say, if the average score is 7 – that’s OK, everything above – progress) and the most common strengths and weaknesses. This work is not complex, but when done objectively it can make valuable conclusions.

So games were analyzed, defects are found and you can start to eliminate them. Suppose, a couple of times one had difficulties in rook endings with the implementation of superiority in the activity of pieces. You can take one of the parties and a spend a lot of time on the part of the endgame, then try to understand similar situations with other position of pawns or Kings, etc. Step by step and the article about the endgame may emerge:). It is not so sorry to spend a few days on this work: first, you can deeply understand this type of endgame, and secondly, the general understanding of the endgame and skill will increase.

Let us talk about how to work with your computer. It can be divided into three components: working with opening databases and games, analysis of positions using chess engines and educational programs. Let’s start from the beginning.

I won’t teach the reader how to use ChessBase or Chess Assistant. I will explain only my own “kitchen”. I use two programs (CB and CA), but mostly CB, since it is more convenient with the analysis mode.

For work I use a relatively small base of annotated games, such as “all informants”, but I don’t almost use huge-bases, since they are 90% of the “garbage” played by A-category chess players in some of the German league on the 8-th board. For the same reason I have ceased the interest to “chess tree” of CA long ago- I am not very interested what is the most popular variant as the most popular is not always the strongest. I can define the most interesting move by myself. Of course, for an average club player, especially when studying unfamiliar positions, you might want to see the picture of the opening in general, and here “tree” might help.

It was written how to study openings already. Once again, let me briefly show one example. For example, you need to find a party on some variant. If to start searching by position or index, we could find 200-300 games. How to work with them? View from the past? The best way, perhaps, to see the interpretation of the strong grandmaster with constantly good results. It is sufficiently to view 5-10 parties, but it happens that one bright victory makes a great impression and you want to play that way.

On studying the variant, I create special bases for openings lines or add comments to my games.

Hand in hand with this goes the use of computer analysis. At the first glance, everything is simple: set the position, switch-on Fritz or Tiger, and play Minesweeper, occasionally glancing over the results. However, it seems to me that qualified correspondent players do not do that, and they use the computer only in those moments when it comes to calculation positions. Most of the work must still be run “handles”. Perhaps the analysis – is the least of what a computer can help people, and especially to growing chess players.

We turn to the last point, to educational programs, such as Chess Tactics Art and Strategy. The principle of “step by step”, which built into them, very good, because it simulates a real game of chess, but not everyone uses it effectively. Perhaps, because of psychology, people somehow can not think for a long time looking at the monitor, so that teaching positions more often solved “by eye”. One needs that desire to be overbeared and work with the full concentration, as at the tournament game.

A paramount factor, especially in our time, is physical training. For some unknown reason it received little attention, especially in the sections and chess clubs. Have you ever seen chess school students, with the entire team running cross or pull-uping “instead of” studding? And in other sports it is called a PFD, and given that at least one session per week.

Clearly, that any player who wants to achieve results should work on his physical form and keep it normal. It is impossible to imagine, for example, tennis player or boxer, just work through the stroke and strategy of struggle. Good physical shape helps to chess player to withstand stress during the game and gives additional confidence in the tournament in general. Personally, I love the weight lifting and table tennis, but force myself to run until I can not (although it must be). The main thing is to engage myself to do it constantly or at least a couple of weeks before a competition.

In conclusion, I confess that everything described above – a perfect case. Sometimes there is lack of energy and will for one thing, once on the other, and sometimes to all together. Otherwise I would have been a grandmaster.